Friends in Bretton Ridge – thank you for your patience this summer while we worked on this series of articles on how to help your home. Through meetings with homeowner and with city representatives, we were able to compile a few examples of what we can do to help ourselves prevent future flooding incidents. Keep in mind that the solutions discussed through the next few posts, over the next few days, are written with the intention to help direct you toward a solution – and are not intended to be a ‘magic bullet’ for everyone. Each home will likely have a slightly different remedy, and will need to make use of multiple strategies to stay dry for the long-run.

In the meetings that the mayor and engineers hosted at Springvale last month, several projects were discussed that hopefully will have an effect on the water and flooding in the long term. However, in the short term, it’s clear that each homeowner and Bretton Ridge as a community can do some work to reduce the risk of flooding during the next big storm.

When I met with the mayor and city crews last month, we were able to talk through many of the underlying problems that we as a city experience when it comes to water. I hope to give an overview of a few of those in this initial post, then get into more specifics in future posts this week.

One of the biggest issues that North Olmsted faces is that it is an old community, and is really built-out. Meaning, that we do not have very much land to continue to build or expand, and that most of the city is occupied by buildings and homes. This creates a problem when trying to find places to ‘park’ water. Many other cities around us like Westlake or even Olmsted Falls are able to find areas to create huge retention basins that help to slow down the flow of storm water. North Olmsted has very limited options where to park water on wide-open land. *However, every new construction project (like the Vitalia senior center) is responsible for managing their storm water on-premises. If you have lived in North Olmsted long enough, you know that flooding has always been an issue. Only recently has the city government made this a priority. As a result, many of the traditional methods of ‘parking’ water in retention ponds is not an option – based simply on available land. However, the city and the mayor are committed to working very hard to find creative solutions, available properties, and loads of options to help homeowners. They are currently working on acquiring some property from ODOT, N.O. Schools and private owners, to facilitate some of these projects. They are listening to ideas and suggestions!

You will likely know or remember, Bretton Ridge was built on old farm land. Like many of the other developments in this area, these farms were sold off and homes were built in the 50’s and 60’s. Remember also that building codes were VERY different in those days, so storm water and sanitation systems were not always built to sufficiently handle the volume of water in these developments, nor were they tied to municipal drainage systems properly. Anyone who has spent time in North Olmsted would likely agree that the city’s building codes are extremely strict now. These same standards did not exist when Bretton Ridge was built. As a result, the street drains, and storm water systems are inadequate for the volume produced by homes in the city today. That being said, the city will not be ‘putting in bigger drains’ any time soon as some people had questioned. This is not practical or affordable. We must consider other options.

Thinking ‘big picture’ you also have to consider that the storm water system that Bretton Ridge has now was built on a ‘100 year storm’ standard. Meaning, the system was designed with a major storm event that would only happen once every 100 years. The science of climate change is real, and it is happening. We have experienced more of these ‘100 year’ storms in the last 10 years, than in the previous 50. This is clear by the storms that flooded Bretton Ridge six years ago, then again this spring. The storm system we have now, in particular, was designed on that old standard. The storms we experienced this year, are likely what we will see in the future: short, high-intensity storms that dump a huge amount of water in a small area. When a large volume of water enters the system in a short period of time, it creates an enormous amount of pressure. When there is enough water and enough pressure built up, it will look to find a release. *This is why parking water in ponds or in the street to ‘slow it down’ is a good idea.* 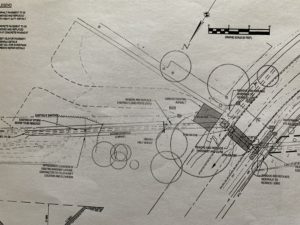 When a huge amount of water enters the system quickly, and pressure is looking for a ‘release’, it will find the weakest point and will exploit it. Often, that happens to be a drain in someone’s basement, a cross-connected line, or something similar. This is why detention and retention helps – it keeps the pressure regulated inside the system, preventing the surge from entering your house.

The City of North Olmsted continues to look for ways to park water around the city to help relieve the pressure on the system in a major storm event. You can see more about what they are doing here.

In the months of June and July, city crews spent 5 weeks in Bretton Ridge alone cleaning storm sewer drains. They were able to clean and camera EVERY drain in the north side of the development, and will restart on the south side at the beginning of August. They were able to confirm that every storm drain is open and clear, and provided some pictures: see those here! Also at the beginning of this month, they will begin ‘smoke’ testing lines on the south side of the development to determine if some lines may be cross-connected with the sewer (more about smoke testing in a future post). The main reason to have this checked is to avoid putting sanitary water in the storm system.

Please know that the City of North Olmsted is working very hard to come up with solutions to a very complex problem. Given the age and dimension of the storm system, and the nature and volume of storms happening, it’s a hard problem to solve, or to plan for, with our city’s architecture and infrastructure. They are trying to acquire more land from ODOT and from N.O. Schools to put in more retention and another EQ (equalizaton) basin at our end of the city, but those plans will still take years to complete.

In the mean time, the next few articles in this series will provide real, concrete examples of what we all can do to help protect our homes from flooding. Be on the lookout for more information on the city’s efforts, what you can do as a homeowner, and what we can do as a community. If you have questions, as always, feel free to reach out via email to: board@brettonridge.com. Also, if you are looking for feedback from neighbors, please feel free to start community threads on our Facebook Group page here.

Join our distribution lists by registering your email address below: