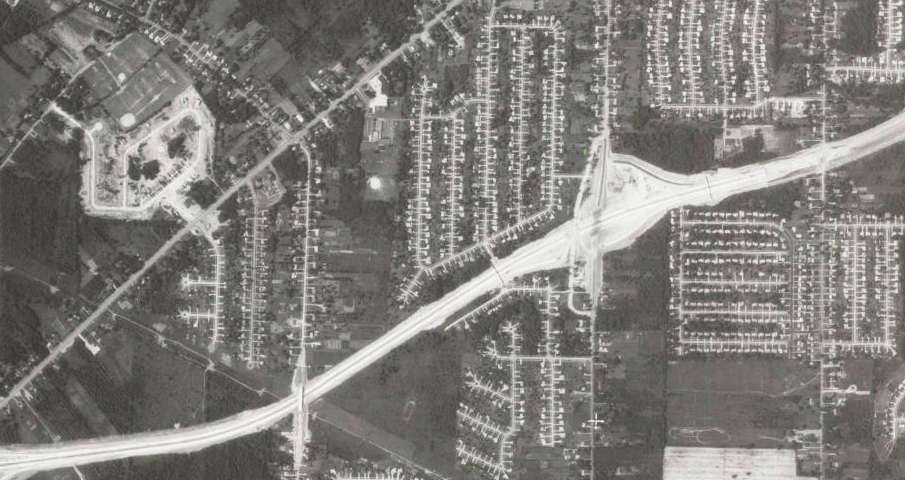 In the early part of the history of Bretton Ridge, not much surrounded our development in North Olmsted. When Bretton Ridge was first formed, much of the surrounding landscape was rural farm country and open roads. The land where Bretton Ridge sits now used to be a part of Olmsted Township. As the city of North Olmsted grew, Lorain Road extended west into Lorain county, Stearns road punched its way south through Olmsted Falls and on into Columbia station and I-480 had it’s sights on the western suburbs.

Our neighborhood was formed in the early 60’s, and the ‘official paperwork’ was filed with the county in 1964 to form the now 509 home plan that makes up Bretton Ridge. In the early 1980’s, I-480 split the development into the north and south pieces we have today.

Also in those early days, as a way to coordinate maintenance and planning with the city, the development’s early residents formed what they called ‘The Bretton Ridge Civic Association”. According to their original charter, the BRCA was formed “to promote and encourage a better community and civic spirit and to foster good will and friendship between and among all the residents of Bretton Ridge…and – to cooperate with county and city officials for the general welfare of the neighborhood”. They also had some members who regularly attended city council meetings to stay connected to what was happening in the city. The first ‘membership’ in the BRCA cost each resident $3 above their dues to the HOA. This rate eventually went up to $5 in 1975 and $8 by the end of 1985. 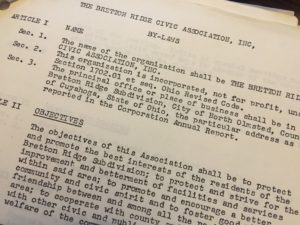 Membership in the BRCA was never that high, each year they raised enough money to keep the grass cut and the flowers in bloom around the entry signs and parking lot. In these first decades in Bretton Ridge, there were three big organizations; the BRCA, the HOA and the Bretton Ridge Women’s club. Many of the clubs had similar members, and drew from similar resources. There was always talk about merging clubs together to save energy, money and time.

As the BRCA membership waned over the years, it became difficult to sustain membership and finances. In the late 1980’s the BRCA leadership approached the HOA about merging. There was some talk for a few years about what that would look like for the neighborhood. Eventually, in 1989, then BRCA president proposed the the BRCA and the HOA merge. It passed unanimously at a meeting of the two groups in February of 1990, and on March 1 of that year, the Bretton Ridge Civic Association officially disbanded.

Within a few weeks, the bank account had been closed, and the two organizations officially signed an agreement to merge. The official duties of the BRCA now merged with that of the HOA. The remaining funds from the BRCA were transferred to the HOA, and that was that!

As a result, the  HOA is now responsible for all the ‘common elements’ of Bretton Ridge. That includes the park, pool, tennis courts, playground, basketball court, parking lot, entry signs, and everything that goes along with those areas…power, water, heat, lights, equipment, etc. Fees collected from annual assessments each year go toward the maintenance and upkeep of all of those systems and common areas!

The HOA is always looking for ways to connect to city government, city council or other planning organizations in North Olmsted. If you are interested in helping us connect in some way, please reach out – we welcome all volunteers and all ideas!

Join our distribution lists by registering your email address below: